The holiday for today is Darwin Day, a day to reflect on the life and work of Charles Darwin (who would have turned 205 today if he were still alive).

Darwin is best known for the research he conducted during a five-year voyage on the HMS Beagle that led to his theory of evolution by natural selection. His works included On the Origin of Species, The Descent of Man, and The Expression of the Emotions in Man and Animals, all of which had considerable impact on the world of science and our understanding of how humans and other species came to be through generation upon generation of breeding and adaptation.

These days we also have the Darwin Awards, which began as a “celebration” of the stupid acts of others that resulted in their own deaths, thereby positively contributing to human evolution by eliminating their DNA from the gene pool. (Have you ever seen the movie Idiocracy? It is most definitely a comedy, but the opening scene scares the crap out of me. I can totally visualize humanity being on this path to utter stupidity.)

But on a lighter note, I did find several items on Etsy that pay tribute to Charles Darwin and his scientific legacy. The first piece of jewelry, inspired by the phylogenetic tree he helped develop, is especially gorgeous! Remember to take a look at some of my other Every Day is a Holiday treasuries here!

_____
Click on the image to see the treasury on Etsy, complete with links to the featured shops and items! 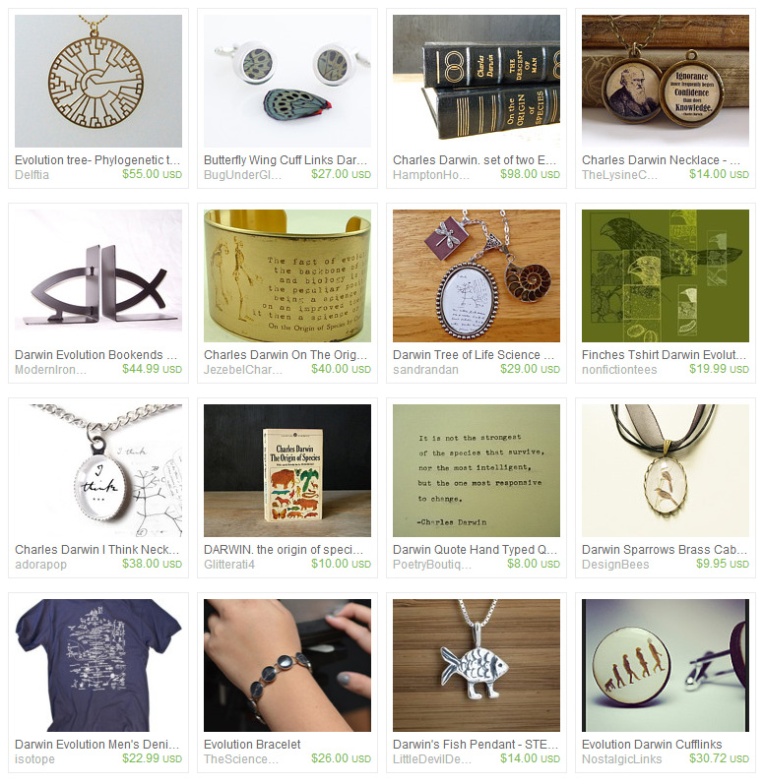 _____
“Every Day is a Holiday” is my Etsy Treasury project for 2014. I’m hoping to find unique and beautiful items that exemplify the holiday of the day—the sillier and weirder, the better! What’s better than finding something worth celebrating each and every day?

I’m a graphic designer with experience in various industries including music, real estate, healthcare, beauty, education and hospitality.
New and exciting print and branding projects are always welcome! Contact me for a design quote.

As a crafter, I specialize in keepsake treasure chests, greeting cards and extra-large Parcheesi boards.