Shocker, right? I mean, only people who hate a given pattern would partially name their blog after it, right? I kid, I kid.

I’d honestly never given much thought to paisleys until I met my husband. He wears bandanas nearly all the time, often the typical paisley ones. When we decided to get married, I tasked myself with designing the wedding invitation set and creating all the centerpieces and whatnot. I knew he would be wearing a bandana on the big day, so I figured I’d adopt the paisley pattern as the visual theme of the wedding to tie in with that. In researching the history of the paisley and working out how to pepper it throughout the wedding, I slowly became enamored with it.

The shape originated around India many centuries ago as a flower motif in textiles, often fashioned after pine cones, or palm or cypress trees. Over the years, the shape morphed and became more abstract, eventually turning into the teardrop-with-a-curved-tail shape we’re all familiar with today. After the East India Company began importing textiles to Europe in the 17th century, its popularity boomed well into the 1800s. Paisleys had a bit of a renaissance in the early 1970s, when designers sought inspiration from eastern cultures to attract the more spiritual and “enlightened” youth of the time. The word “paisley” is derived from the name of the town in Scotland where production of textiles with this pattern, particularly women’s shawls, flourished. (Sources: 1 2) 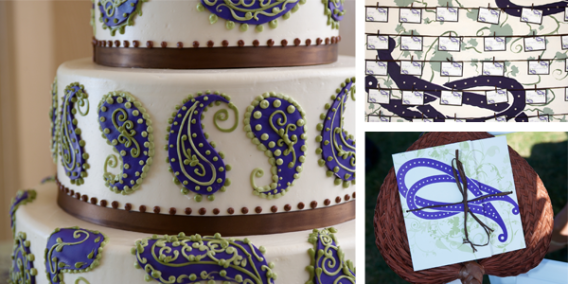 I eventually created my own illustration to be used on the invitation set consisting of two intertwined paisleys representing my fiancé and me. It’s sorta my take on the cliché of two intertwined wedding rings, but adapted to represent us. This was featured on the save-the-date magnets, the invitation itself, the reply cards, the place cards, the thank you cards, the program… right down to the address labels. A friend of ours even painted his version of the paisleys on a board so it could be displayed behind the place cards. I stained a wooden treasure chest to collect the cards and gifts, and upholstered the inside with… you guessed it… paisley fabric. I also requested paisleys for the wedding cake. Not my design though—I let the bakery have some creative freedom and just asked that they stick to my color scheme (and I think they did a beautiful job). I’m rather surprised that I didn’t insist on finding a paisley wedding dress.

Nearly five years later, I still love the paisley pattern. I find myself drawn to it whenever I go clothes shopping, and have ended up with several paisley blouses. Friends and family have also started giving me paisley themed gifts. When making the six-man Parcheesi board, I incorporated paisleys into the design since both have roots in India.

I love that there are countless variations of paisleys, and that they can be found in just about any context. There are intricate traditional paisleys, retro flower-power paisleys, simple modern paisleys. They can be part of a repeating pattern, or singular graphic elements. They can be woven into textiles, embroidered, beaded, tattooed with henna, carved into wood, stamped, wallpapered onto a wall. I’ve seen them featured on iPhone covers, crocheted into potholders, crafted into jewelry pieces, etched onto guitar picks, turned into cake molds and cookie cutters. The paisley possibilities are endless!

I suppose I now owe you all an explanation of where the “avocado” portion of the name came from. I’ll have to save that for another blog post in the future. 😉

I’m a graphic designer with experience in various industries including music, real estate, healthcare, beauty, education and hospitality.
New and exciting print and branding projects are always welcome! Contact me for a design quote.

As a crafter, I specialize in keepsake treasure chests, greeting cards and extra-large Parcheesi boards.